skip to main | skip to sidebar

Not only have we lost some great Crossers in recent years but we also lost this symbol of the club. I think this photo (by Mark  Brown) sums up the club beautifully - it would surely make an ideal front cover for the club history... 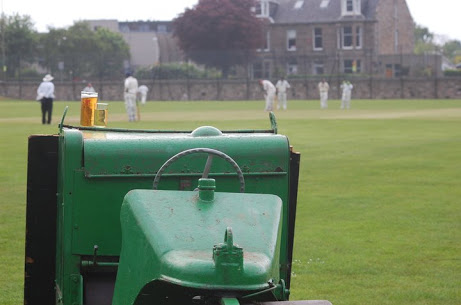 I believe that it shows
Dougie Russell
batting with Ziggy - probably in a damp, low scoring match vs Fauldhouse in May 2011. After a good bowling display in helpful conditions, a top order collapse had us struggling. Despite some lower order heroics from Anzelm and Dougie, it was eventually a tough loss 9 run loss. 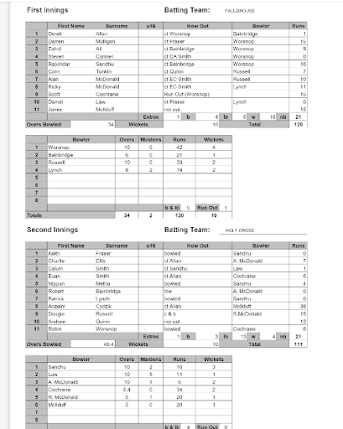 As to the roller itself.. Well, possibly in an agricultural museum...or on a scrapheap.. The engine was certainly a bit underpowered.. I once timed how long it took to get from the container to the middle...about 13 mins...
Posted by cje at 11:38 No comments: 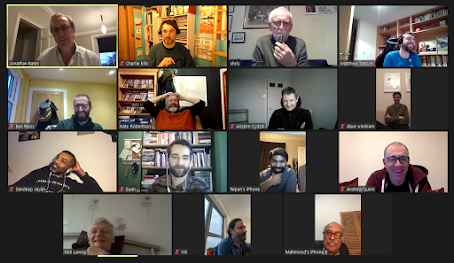 In his presidential comments, Mahmood Din reflected on the sad loss of club legend Colin McGill last year- 'he could be a pain in the ass but made a massive contribution to the club in his various roles'. Looking forward to the coming season with some optimism, Din was confident that 'will get some cricket, if not anything like a normal season'.

Club Secretary Jon Bates talked of the substantial storm damage suffered by the clubhouse in March 2020. The rugby club had been proactive and their efforts had returned the clubhouse to its original condition. Some donations from HX members had assisted with this work.

He said that the recent statement from Cricket Scotland gave 'some reasons for optimism’. Now that it had been established that cricket was a non-contact sport, it seems likely that it could make an earlier return than last year. Though there will, again, be no indoor nets.

ESCA's latest statement suggested there was no point in organising fixtures until April when the situation would become clearer. There will likely to be some issues regarding Edinburgh Leisure grass pitches as there was a push to move the start of the football season forward. Given likely travel restrictions, there might be a need for some regionalisation- at least in the early weeks of the season. From ESCA's point of view, a season of 12 or 14 weeks would be needed to constitute proper season with relegation and promotion.

In his treasurer's report, Jon stated that: 'the financial position of the club is robust'.

Ben Reiss reported on the first XI who played 7 games- 3 intra-club matches and 4 friendlies. As he put it, 'everyone was grateful to get out of the house and into the open'. They had been a successful set of matches, with two particularly enjoyable games against Stewarts Melville. 40 players had offered their availability at points during the season -  out of a mailing list of 108. All the midweek games had been rained off and there had been no second XI fixtures.

Other topics discussed included the memorial match for Colin McGill which will hopefully take place this coming season. It is intended that Holy Cross players from past and present will take part as well as some of the ESCA players closest to Colin (from Marchmont, Heriots etc).

Mention was made of the fantastic archive which the late Hugh Kilpatrick had put together- both his physical and computer records, as well as memorabilia. Chris Kerr will be in contact with the family regarding the physical records, while Ken Lawrie will try and transfer Hugh's computer records into a more modern and accessible format. There was a hope that some of Hugh's photos could be displayed in the clubhouse- in the Green Room.

Mention was made of updating the HX website. This will hopefully happen soon, with some of Mark Brown's excellent photos being added. There will hopefully be scope for some of Hugh Kilpatrick's photo archive to be added.

India suffered an embarrassing collapse in the 1st test versus Australia- all out for a paltry 36.. truly shameful for any team to be dismissed for such a score.. 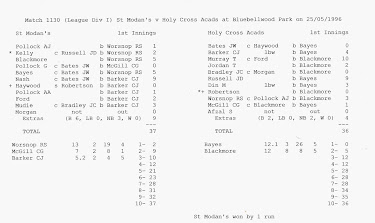 We are sad to have to report the death, earlier this summer, of George Balfour, a founder member and former club captain. George's nephew, Sandy Balfour, author of a number of books including What I Love About Cricket: One Man's Vain Attempt to Explain Cricket to a Teenager Who Couldn't Give a Toss, writes:

George Balfour was born in Kirkcaldy in 1932. He was the third son and fourth child of Tom and Rose Anna Balfour. The family moved to Edinburgh in 1935 and George started his education at Holy Cross in 1937. This was interrupted by the war; in 1940 he and his two elder brothers, Tom and Robin, were sent to boarding school in South Africa. He returned in 1945, completed his schooling and went on to do a law degree at Edinburgh University. George never practised as a lawyer, preferring to ply his trade as a publican, first in Swindon and later at Basingstoke Cricket Club, where he was something of a local legend. George was diagnosed with dementia in 2008 and spent his last few years at the Arbory Care Home in Andover, where he would regale passers by with his two favourite stories: seeing Len Hutton make a century at Lord's (against Australia in 1953) and a cover drive he played at Holy Cross that same year. In George's telling of it, his cover drive was marginally the more beautiful thing. He is survived by his son, Colin, his two grandsons, and many nephews and nieces in Scotland, England, Belgium, South Africa and Australia. 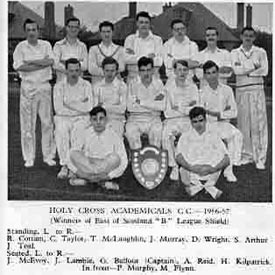 With Chris Kerr's help, we can sketch a little of George's playing career at Holy Cross. He was not merely a founder member. He also scored the club's first runs, hitting the first ball of our first innings for 3. (The outfield at Colinton Mains Park must have been long that day). As in that first game, George usually opened the batting. He also bowled off spin and was club captain for six years (1955-7;1959-60; 1963). He left for Swindon in the late 1960s but, in a fine example for all one-time Crossers, would return to play two or three games a year for the club in his summer holidays. (During this time his brother Brian was club President 1970-4). He returned to Edinburgh in 1978 and opened the batting with John Brown as the 2nds won Grade B that year. He left for England again in the late 1980s but returned for our golden jubilee celebrations in 2000. He was made an Honorary Vice President for, in Chris's words, "years of service and devotion. Well merited." RIP.

Esteemed Crosser reaches 90 not out 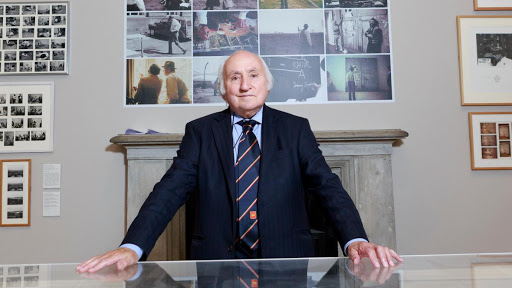 A great Crosser celebrated his 90th birthday on July 9th. Despite Richard Demarco's many significant achievements in the cultural sphere, he maintains fond memories of his time as a young Holy Cross cricketer.

As we know, the Edinburgh Festival and Fringe won't be taking place this year. The Cowgate, usually a hive of activity at this time of year, was serenely quiet as I passed through it on Wednesday morning. I was on the way to meet Richard Demarco in relation to his massive archive project (currently based at Summerhall). Despite his long association with both the International Festival and the Fringe, he was not unhappy about the cancellation of this year's Festival. Though the Edinburgh Festival ‘gave Edinburgh a much needed special dimension’, he feels that the Festival has lost sight of its original mission and a rebirth is long overdue. Perhaps the year off will lead to some rethinking..

90 not out is a fine achievement for any cricketer and for any Crosser. Demarco attended Holy Cross Academy from 1941 until 1949. He was delighted to hear of my connections to the cricket club. He had heard about Hugh Kilpatrick's death. Both were at Holy Cross at the same time (Richard 3 years older than Hugh). He passed on his good wishes to the club and hopes that it can keep alive the Holy Cross name (the school having closed in 1969 and the rugby club having become Inverleith in the 90s). When reviewing the history of the school (published 10 years ago) he suggested that the cricket club 'deserves to have a history all to itself'. 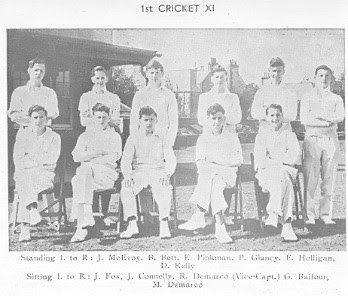 Richard admitted that he was ‘obsessed’ with cricket in his youth, as the letter below from David Harding (another Holy Cross Academy pupil who became a leading artist and art teacher) makes clear. The letter indicates Demarco’s passion for record keeping - something he’s maintained throughout his life, culminating in his archive which contains hundreds of thousands of items. The photo of the 1949 Holy Cross Academy school first XI includes both Richard and his brother. According to Hugh Kilpatrick's computerised records (which only cover 1st XI matches), Demarco only once turned out for the FP 1st XI (his brother Louis played 4 times). 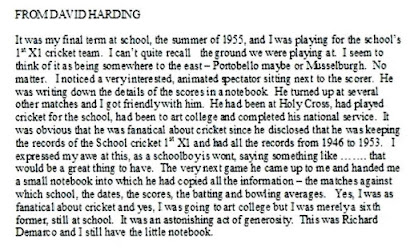 Demarco is currently in the midst of organising his vast and rich archive with the hope that it will be transferred to a purpose-build home in Granton ...possibly in 2024. From the energy and passion for life and art he displayed when I met him, a century seems within the grasp of this legendary Crosser.

Colin was given a send off in a charming service led movingly by his sister Jane at Mortonhall Crematorium. With numbers strictly limited, 6 Crossers were in attendance: Shifty, Mahmood, JB, King, Smudger and Charlie (many thanks to Smudger for liaising with the family and ensuring the the Cross were really well represented). 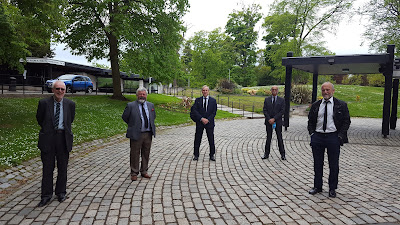 Jane affectionately detailed his childhood love of words games and music and his mischievous sense of humour. She went on to describe his supportive and caring side and read from a story that Colin regularly read to her children. Fairport Convention's Who Knows Where The Time Goes? was a moving choice of song as we were invited to think of our own personal memories of Coco (my mind drifted to an image of Colin, fag in hand, rolling the wicket in the evening sunshine...).

Both Jane and Colin's wife Anne thanked all those who had sent cards and who had left comments online about Colin since his death.  Shifty (looking more like McGill with every passing day!) gave a superb eulogy (as previewed on the HX blog) which captured Colin's character -and his ability to make us all laugh- wonderfully well. We left the chapel to the strains of the TMS theme Soul Limbo which ended proceedings on an uplifting note. It's just a pity that so few people were allowed to attend- the place would have been thronged with East League cricketers in normal times.  Colin's wife Anne hopes we can have a celebratory match at Arboretum in Colin's honour. Hopefully things will ease enough to allow us to hold such an event sometime this summer. 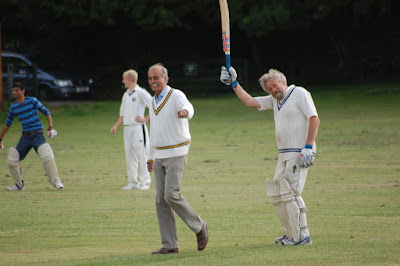 With Hugh & Colin dying within a few months of each other, it’s clearly a sad time for the club. They were-I’m sure people would agree- very different characters, though they had a shared passion for cricket and statistics. In their different ways they both characterised the spirit of the club and its ability to contain within it a wide variety of personalities. With Colin’s passing we’ve certainly lost one of our great characters though he will long be remembered by us all and those he spent time with on and off the field.
Posted by cje at 19:35 3 comments: 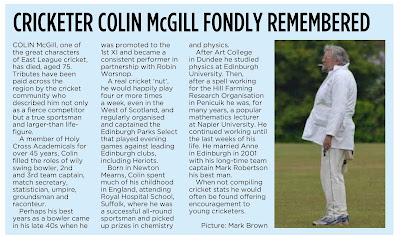